The Travel Of The Human Hamster Ball

The Travel Of The Human Hamster Ball 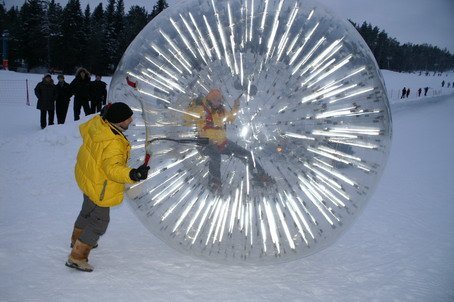 A sunny Sunday, my parents, eight people together to the farm to play. A door, I was pleasantly surprised to find and “human hamster ball” is very similar. It attracted me, Human hamster ball is I have been looking forward to play something, that thing in the sparkling blue water on the rolling, splashing up from time to time, and then have a look inside the people playing, they laughter as if urging me to play. Always want to have this time I, watching them playing Yanger, heart itch incredible. I’m a hand pulled her sleeve, the other hand towards it: “Mom, I want to play the!” But my mother has been in front performance attracted, he replied: “when you play.” I’m down, although the performance was wonderful, but as long as my eyes to the left a look, look at the stuff, the heart wants to play desire arise spontaneously. After many people, I said to my father: “Dad, now that so many people, will be a field, we play things have a long row of the team.” Dad took me no way, had to let Zhang Wei and I went to.
Zhang Wei and I went to that. Next, next to a sign, writing above: water walking ball ? Can walk on water? That sounds good, I get the ticket, happily. Walk on water ball has three layers of transparent air, each layer of air cushion has many ropes together. There is a net barrel water walking on both sides.
The staff and the net buttoned, and then the water walking down the water bucket. I had to stand up with great care, and try to walk on water barrel to move, I like a mouse hole in plane as in the crawl, two people who climb is a bit slow, will be posted on the wall, if the other person will not save you, and you will turn a somersault. I’m not ZW climb quickly, so several times awkwardly stuck on the wall, and difficult falling. So I want to walk a way — walking on the water in the bucket, so as not to be so embarrassed. However, the results with I think exactly the opposite: I walk a little faster, will fall down, walk a little more slowly, fall, several times are ZW pulled me up.
Five minutes, we went on shore, but strength is not disappear, we were both in pleasant aftertaste just scene. We after all is said and done, just one word: “very fun, but it is hard to play.”

admin
Previous Post To play by mounting a bubble soccer suits Next Post Why Holleyweb Inflatable Pool Is Better ?