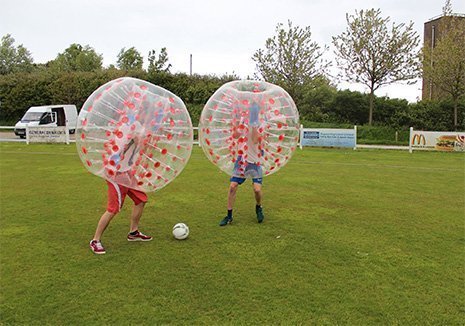 Also called bubble football, zorbing football is essentially soccer, only the players are encased in inflated plastic balls (which cover their heads and upper portions of their bodies).

Zorbing football is typically played in sports halls, though a number of games have been known to take place outdoors, particularly on grass. While little more than a joke at the start, zorbing football has grown in popularity over the years, with numerous individuals and groups of individuals around the globe taking an interest in the game and beginning to participate in larger numbers than ever before.

+Who can play Zorbing Football?

The game is usually open to most people from all backgrounds and genders; though only individuals above the age of 14 are encouraged to actually participate in the sport. You can expect to find zorb football in a number of fields and situations, from stag parties to corporate team building sessions.

For those individuals that are not quite sold on the idea, the sport has a number of variations that are bound to tickle many an interest.

Considering the impact the sport has had globally, it is difficult to believe that zorbing football has only been around for a couple of years. The sport was created by Henrick Elvestad and Johan Golden. The pair is the host of a popular TV show called Golden Goal.

And it was during a particular episode of the show that Henrick and Johan filmed their first game of zorbing football, largely as a joke. The video of the first ever bubble soccer game (at least as far as can be determined at the moment) hit the internet and caught fire, attracting millions of views.

It wasn’t long before zorbing football escaped its home of Norway and finally landed in the UK; attempts to expand its reach begun with Lee Moseley, a British entrepreneur whose efforts to light the zorb soccer spark failed to impress investors who simply could not see a future with the sport in the country.

Far from discouraged, Lee made the difficult decision to push forward with his idea, eventually financing the project and transforming Henrick and Johan’s sport into a nationwide phenomenon.

The concept of zorbing football is pretty simple; first a player must acquire a zorb; the zorb, a plastic orb, is worn rather than entered, encompassing the upper half of the body. You will need to make use of the grips inside the orb.

The orb should provide enough freedom for your legs to allow you to run; you should also take note of the hole near your head purposed towards allowing air into the plastic orb.

The typical zorb should include straps that can be used to adjust the zorb to meet one’s size requirements. With a zorb on hand, the game doesn’t differ that greatly from traditional soccer, at least at its core, the objective being to send the ball into your opponents net.

The ball is placed at the center of the field where the players can descend upon it the moment the whistle is blown, with the key to success revolving around not only putting the ball into the net but knocking your opponents down.

Zorbing football is a very physical game, the kind that might prove dangerous to individuals with high blood pressure, back problems and other issues within this vein.

admin
Previous Post Are You Out For Some Fun? Why Not Try Bubble Soccer Perth Next Post What is bubble football?